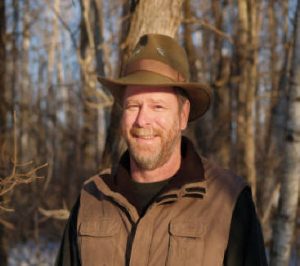 Tom Gibson has been a free-lance environmental educator/entertainer since 1986. He developed his first program, Pierre Bottineau, during the summer of 1983 and continues to portray the voyageur along with several other characters in his work to promote environmental education and awareness.

Tom has an Associate Degree in Wildlife/Forestry from North Dakota State University – Bottineau Branch (now Dakota College at Bottineau), and a Bachelor of Arts in Biology from the University of Minnesota, Morris.

Tom taught Wildlife Management, Parks and Recreation, and Environmental Education during a one-year appointment (1983-84) at North Dakota State University – Bottineau. He worked as a naturalist at Lake Metigoshe State Park in north central North Dakota for five summers, and developed and directed the Turtle Mountain Environmental Learning Center from the fall of 1985 through the spring of 1986. After leaving the North Dakota Parks and Recreation Department Tom took his show on the road, entertaining audiences of all ages. He has added five more characters and six programs to his entertaining repertoire.

Sam Ting has been entertaining and educating audiences for more than 20 years. He has delighted crowds in 20 states and two Canadian provinces with his strictly comedic routine, along with an alternative program that incorporates environmental education.

The “TREES” program consists of six separate programs designed to emphasize the need to protect and conserve our natural resources. They are presented lyceum style or in classroom setting.